I’m a fan of the Moviebarcode Tumblr blog, which creates elegant “barcode” versions of movies and other visual media. Conceptually, it’s similar to what Lev Manovich does with image sets and that I and my DGST 101 students tried to replicate last semester. Instead of shrinking each frame into pixels on a tapestry, moviebarcode squeezes them into pixel-wide stripes of color. One thing I like about moviebarcode, though, is that the images are, for lack of a better word, really neat. And I like that they’re presented without commentary and are circulated, one assumes, mainly for their aesthetic interest within the ecosystem of Tumblr.

At the same time, it’s still an interesting way of “not-reading” a visual text. By looking sideways at its content, the not-viewer may find all kinds of interesting patterns and structures.

So what happens, I wondered, if we apply the same technique to a work with no content? More specifically what would a barcode of Nam June Paik’s “Zen for Film” — reveal, obscure, or suggest? 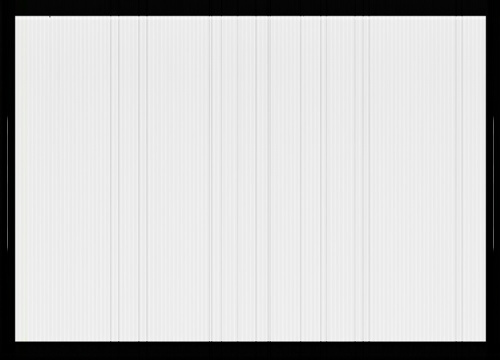 Of course, this symmetry isn’t completely inherent . I did make several choices in producing this barcode that influenced its similarity to the frame. But even if I’d approached it differently — if for example I changed the aspect ratio or the duration and frequency of extracted frames — the results would have been basically similar and still pretty striking.

I’m not sure what this means, but I think it’s important. It actually seems ironically zen-like in the way it links the part to the whole, which is ironic because finding an expressive path to convey Zen ideas wasn’t necessarily the artist’s intent.

Nam June Paik was an experimental video artist whose work can be overwhelming spectacles of excess. Electronic Superhighway and Megatron/Matrix, for instance, are on permanent display at the Smithsonian American Art Museum and are well worth the trip to see in person. Across the hall from Megatron/Matrix, however, is his much quieter piece, “Zen for TV”, a 1976 television “manipulated” (as the catalog description says) by Paik to display a single white line.

Like many so-called “empty” works, the content of Zen for TV is its context. Its “content,” if we must, is the TV apparatus itself, the gallery space around it, the phosphorescent screen, the hum of the cathode ray. Just as John Cage’s 4’33” isn’t really about silence, “Zen for TV” isn’t really a white line.

It’s a productive idea to riff on, as I once attempted to do in a series of Tumblr posts: first in a straightforward looping GIF of frames from Zen for Film, then in a homemade GIF with 7 frames that display for one minute each before looping to the next one, and finally in a similarly home-made, minimalist zen GIF of 3×3 pixels. (The variable shading and implied rounding is an artifact of Tumblr’s upscaling.)

Nick Montfort has also followed this thread with a “Zen for Commodore 64”, part of his contribution to “Progams at an Exhibition”.

Each of these “Zen fors” and riffs addresses, through various means, their various medial containers, but each still reflects artistic intent, craft, curation. In my GIFs, I was definitely interested in exploring what I think are the significant properties of the GIF format.

Here’s a similarly-motivated work focusing on and emphasizing the generative impact of the JPG format’s lossy compression algorithm: 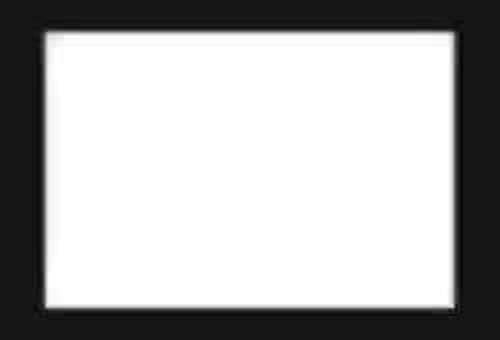 That’s the result of 10000 resizings, and it’s actually not as bad as I thought it would be.

If you’re interested in reproducing any of this work or perhaps you just want to try out some movie barcodes, here’s a brief summary of what I did. As before, I’m using “avconv” and “ImageMagick” on my Linux computer (Ubuntu 14.10).

First, my barcode technique is really simple, but I wanted to make sure I was doing basically the same thing as moviebarcode. Serendipitously, moviebarcode has done one for Brazil (1985), and I happened to have a copy on my hard drive for reasons that I don’t recall. I figured I could try it out and then compare my results to the original.

So first I extracted a bunch of frames (one for every 2 seconds of film):

Next, I resized them down into strips that were 480 pixels tall by 10 pixels wide:

The 480x10!, I learned, has to be “emphatic”, otherwise Imagemagick will interpret those as maximum potential values and try to keep the aspect ratio intact — something I don’t want here.

Then, I tiled all of those JPG strips into one long image:

And finally I squished that ridiculously long image down to the same size as the moviebarcode tumblr:

The results on my first try were pretty good:

Compared to the original, my colors are a little muted, and I didn’t trim off the letterboxing or end credits. I also may have the director’s cut, which would certainly make some differences. But regardless, many of the same patterns and structures stand out in both images.

Repeating the process with Zen for Film was straightforward, with the result you see at the top of this post. The main difference was that the version of Zen for Film I downloaded (from Youtube instead of ubuweb because I have an easier workflow already in place for downloading from the former) was already at a lower resolution, so I didn’t have to scale it down to begin with.